Over the weekend, I was at a friends house. I needed to use the restroom, but also needed to throw something away.
The following map will help explain: 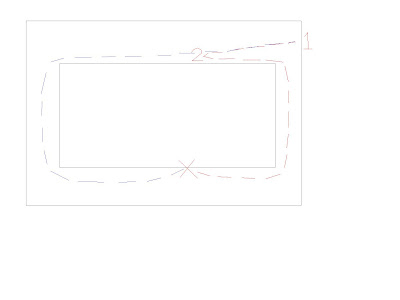 If you can't see the map, it is here.
It's not quite to scale, but you get the idea.
I started at number 1. The trash can was at number 2, and 'X' marks the spot of the restroom.
The blue lines are the path I followed. When I returned, my friend laughed and said I had gone the long way to the restroom. She suggested the red lines were a much quicker way. Now we aren't talking miles here.... maybe a few extra feet, possibly 10 maybe.
I said that my path, while maybe actually longer, required me to exert less energy, as my momentum was already heading in that direction, and I could simply toss my trash in the can, without stopping, and continue around the house. I argued that stopping, and changing direction would actually require me to put out more energy than taking the 'long way'.
We didn't spend hours discussing it, maybe a minute, maybe not even that long. But I've been thinking about it, and my original excuse was that I am lazy, and it would take extra effort to change my momentum and direction. But after thinking about it... I think maybe subconsciously, I'm helping to save the planet.
Conserving the energy it would have taken to change direction, means smaller carbon footprint right?
Hey, I'm "Going Green"!
Posted by CJ at 9:57 AM No comments:

So are tasers a deadly weapon or not?

For years, police departments have been tasing people to simply get them under control.
The most recent being the kid who ran on the field at the Phillies game. Police couldn't catch him, so they tased him. Then took him off the field:

This officers actions were deemed appropriate by the Police department.


It was also determined that the police were justified in their use ofthe stun gun in this event.

Police also tased a 72 year old woman who refused to comply with orders:

This too was determined appropriate:


Hell, police have even tased a 6 year old!

And declared that justified as well.

They justify these cases, by the fact that the stun gun is a non-lethal, non-deadly "tool". Unlike their handguns, which obviously are deadly weapons.

Ok, I'm not saying I disagree with any of these decisions. Hell, I love to watch some jackass who thinks he's gonna be cool and run on the field in the middle of a baseball game take 50,000 volts to the back of the neck. I only wish I was there to see it live.

Maybe if they start doing that regularly, ticket sales will increase. I know I'd start going.... anyways, I digress....

If the police justify their using of tasers, as a non-lethal means to subdue a criminal, then why are these women, who chased some guy with a stun gun, being charged with "Assault with a deadly weapon"?

So the police are being quite contradictory here. Is a stun gun a deadly weapon or not? And if it is, why are you using deadly force to stop some guy running around a baseball field?

There is no double standard here. Pick one!