Back around 1990 or so, I witnessed a horrific act....
Someone physically damaged another person's property and totally blamed it on someone else.....

I've carried this with me for the past 19 years and feel I need to come clean....

I shall do so in Haiku form, in a poem I have aptly titled:

Beach trip and burned dress,
The culprit blamed it on Luke.
Poor boy! It was Tink!

Ok, I've chosen another Ralph Bakshi film for this 15 Minute Cinema.
Wizards... It's about the struggle between Technology and Magic after the holocaust.
It's a great movie, and another of my favorites.
Another hard to find movie as well, but I do know it is available on DVD.
Again, try Google Shopping.

Email ThisBlogThis!Share to TwitterShare to FacebookShare to Pinterest
Labels: 15minutecinema

I have given Republicans a lot of shit over the years.... And I'll admit, most of it was justified...

However, my Congressman, Randy Forbes (Whom I voted against every election up until this election) is winning my heart every day....

He knows whats up with these bailouts! 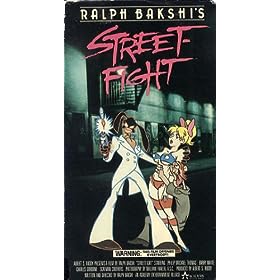 Todays 15 Minute Cinema is a film by Ralph Bakshi. Bakshi is probably most famous for the movie Cool World.... unfortunately, in my opinion, thats the worst movie he's done....
Streetfight was originally named Coonskin, but it received so much backlash from Black Leaders who had never even seen the film, it was retitled. Since then, it has been called Bakshi's best film ever.
It's full of symbolism and a ton of racial stereotypes. Pokes fun at blaxploitation, Song of the South, and the Godfather.
It's a great movie, unfortunately, it's hard as hell to find. I first saw it back in the early 80's, but had to resort to eBay to get myself a copy, paying around $45-$50 for a VHS copy. I don't think it was ever released on DVD.
There is a TON left out of this movie, so again.... if you can find it, BUY IT!! The full length movie is TREMENDOUS!!!
I think I ran 1 second over 15 minutes on this one - I'm still trying to figure out iMovie and my Mac.
Posted by CJ at 8:00 AM 2 comments:

Email ThisBlogThis!Share to TwitterShare to FacebookShare to Pinterest
Labels: 15minutecinema

This is the first, of new content I will posting here, called 15 Minute Cinema....
I will take movies that I think are awesome, and shorten them down to 15 minutes, while still conveying the complete story.
This first post is a sweet movie, written by Charles Bukowski. It's called Barfly, and stars Mickey Rourke and Faye Dunaway.
After watching my 15 Minute Cinema version, if you like it, I strongly suggest buying the movie. It's 1000 times better. I just want to give people an easy way to find good movies.
It's a hard to find movie, but you can check Google Shopping for starters.
Posted by CJ at 12:30 PM No comments: